Last Wednesday I went looking for a branch. It was just prior to my first grade 9/10 leadership class of the year, and I found myself searching frantically for an ‘object’. Never before had I needed an ‘object’ to start the year, but this time was different from any of my other 18 starts to the teaching year.

With support and encouragement from two SD67 colleagues, Naryn Searcy (@nsearcy17) and Judith King (@judithaking), I decided it was time to try a sharing circle. It seemed that all of the pieces just fell together at the right time to push me out of my teacher-centered comfort zone. Just last week I attended a fantastic professional learning day put on by Judy Halbert (@jhalbert) and Linda Kaser (@lkaser). They started the day off by splitting the large group into two sharing circles and gave us these prompts: (1) share with the group one highlight from your summer and (2) let people know something you are looking forward to in the year to come. It was a great start to the day as everyone had a voice! Linda made an interesting comment to the effect that sharing circles have been a part of human existence for thousands of years, and should not be discounted as a powerful tool to aid in our communication and understanding of each other. This argument certainly caught my attention.

As the start of my leadership class drew near, I sought advice. Naryn was incredibly helpful in sending me a link to her site including the background and protocol for sharing circles.

Back to the branch. Advanced planning has never been my forte, so it came as little surprise that i did not have an object ready for the first day of the circle. Five minutes before class I found myself removing a branch from a tree at school as there were none on the ground to choose from. For the record, the branch I selected looked to be one in need of pruning. A student passing by asked why I was removing a branch and I told her I needed it for class. As fate would have it, she was one of my leadership students.

DAY 1: The first attempt went quite well. I started by relaying the protocols listed by Naryn, but I did not post a sign on the door. There were only 14 students in my class, so I thought I would wait until the class lists were solidified. After covering the protocol, I asked the students to tell the group a little about themselves and I asked them to consider the two questions used by Halbert and Kaser.  The sharing circle start to the year was well outside my comfort zone, and I let the students know about my discomfort in trying something new. I also commented that leaders need to take risks and model that for others, and on that note I decided to go first. About half the class kept their responses very short, but a few students went into detail. I left class energized and excited about introducing a new element to my teaching. I was certain we were going to do another circle the following day.

DAY 2: During our second circle, we must have been interrupted about five times as new students entered the class. Clearly the counsellors were sorting out the grade 9 class lists as my class population of 14 soon turn to 28. As we expanded the circle by adding more chairs, I repeated the protocols for those new to the class. The sharing topic asked students to share their favourite movie or book, tell us a little about the premise and why they liked it. Naryn had advised me to give the students a few minutes to consider the question before starting. This was sage advice. The responses were much more detailed compared to day 1. As each student held the branch and shared their favourite entertainment portals or book choices, I could see that students around the circle react with gestures and expressions (silent) that showed agreement or approval. Based on this observation I decided to pass the branch around the circle again and let students respond to whomever they liked. One student started with, ‘I can relate to {student name] as I too like that book series.’ This stated a chain reaction with many students using the same intro statement. I watched students reach across the circle with their words of agreement, support and connection – it was really neat to see.

DAY 3: Students could choose between two questions: (1) What are your plans for the weekend? or (2) What is the scariest experience you have had in encountering an animal? The sharing went really well, with the more detailed responses entering around the second choice.

DAY 4 (Monday): To be fair to the animal kingdom, I asked students to share something about their favourite pet or animal, or they could choose to share a highlight from the weekend. The conversation was slow at first, but when I passed the branch around for the second time, there was a lot of responses to what others had shared.

Compared to last year, the first four classes have resulted in developing community much faster and I already get the sense that students are willing to share on a level usually experienced further into the year. I agree with those who promote this method of communication and community-building in that students feel empowered by either speaking or choosing to ‘pass’.

I will make a sincere attempt to  continue sharing of this experience as the year progresses. My intention is to start each week with a sharing circle. To be continued…

Week 5: We have started off each week with a circle and once in a while we run one mid-week. Some topics have included ‘scariest/funniest animal experience’, ‘defend your favourite fruit’, and a few others. Todays’ topic, ‘LOST & FOUND’, resulted in our best sharing circle yet. I shared a quick story with my students. Over the weekend I left an article of clothing at the hockey rink where I was part of a coaching clinic. In the pockets were my wedding ring, watch, $200 US, and my phone holder. Much to my delight, when I returned to the rink this morning the rink attendant had picked up the item and all contents were still in the pockets. I asked the students to select one of the following topics:

The results were amazing. We had the branch go around the circle 6 times and the stories were funny, interesting, and even sad. Some students passed the branch four times and felt safe to share on the fifth lap. Before I even noticed, 50 minutes had gone by and students were still busy relating to one another, sharing personal accounts and listening to the oral histories of each other. It was incredible. I am seeing students beginning to weave in personal elements that up until now have been left out. A student mentions that he/she has not seen a family member for a long time, another mentions the closeness he feels with a sibling that has moved out, someone shares a now funny account of being terrified while lost in a crowd.

Today I asked students to reflect on their thoughts on the sharing circle experience thus far. Here are two journal entries that are typical of many. To be continued… 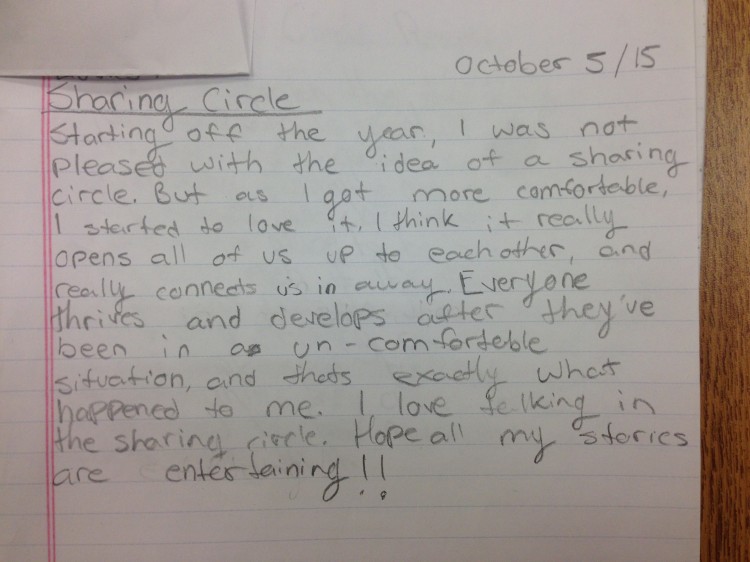 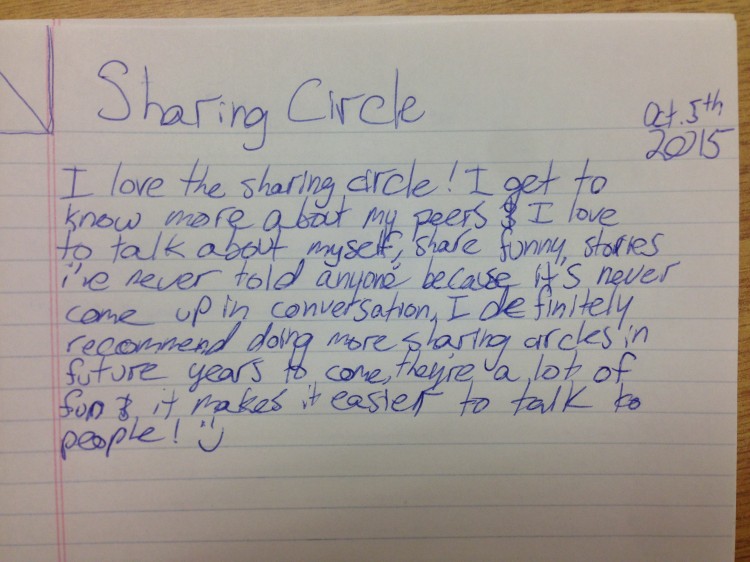 One thought on “Sharing Circle – My foray into the unknown.”